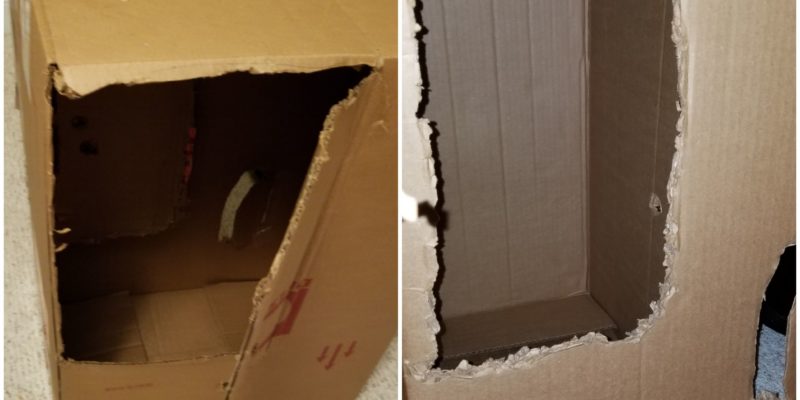 An interesting encounter with my 7.6 y old

When we are not distracted by media or TV or low priority distractions we actually let our minds wander, wonder and imagine. This is one of the greatest gifts we have been given. We all have had the experience of day dreaming, having a fantasy and imagining. Some would say it is a waste of time. I would say if it consumes your entire life and leads you to no inspirational works then imagination is simply in your head and not in any action, that would be a waste.

So my 7.6 y son loves to build. Anything. Lego, blocks, create elaborate forts, use the entire furniture in the family room to make space ships or a hotel, use pillows and create a livable tower etc. So recently he takes cardboard boxes, hammers, screwdrivers, and scissors and duct tape turns into MacGuyver. In a matter of an hour creates a mini fort with rooms and doors. Now yes it is small, but that did not deter his imagination.

I could hear the entire elaborate drama conversation in the next room. All sorts of characters sprung to life with missions and goals and jobs to do. Tasks were appointed, and schedules were made. It kept him busy for almost 3 hours. He even recruited his little sister for assistance. ( she follows him everywhere)

I popped my head to see the situation. There was a bedroom complete with pillows and blankies inside for 2 and also an entire library of books nestled in. They had made their own traveling Recreational outdoor camp. I was then given the grand tour of where the bathrooms would be, the living area, the kitchen and in case of emergency the plan of action. I was stunned. All this from cardboard boxes. Who needs toys !! All his lego men were strategically placed to help welcome people to his camp. This was incredible. He then wanted more boxes to build another level and extension !!!

I share this with you to reinforce a point. The human mind is capable of so much more than each of us use it for on a daily basis. Whatever we are doing in life, even at its best, we still have incredible potential of expansion to new levels of awareness and heights of progress. I mean just imagine the delicious creations of Willy Wonka !!

The imagination of a child is wondrous, when untainted by outside prejudices and devices, has the amazing gift to change the world.

All we have to do is believe and create. Our imagination is the creation of the reality which the open heart already knows.
………………….
I love you